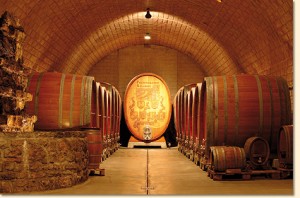 Before our wine cooperative was founded, in the mid-Neckar valley north of the Germany city of Stuttgart, autumn wooden tubs would line the streets in front of our houses and around the vineyards. The tenants in the towns around Besigheim had no way of storing wine themselves and were forced to rely on wine merchants. Tenants sought to organize themselves into communities or cooperatives in order to coordinate the wine making and the marketing.

In 1938 twenty Wine merchants from Besigheim agreed on common grape harvesting dates. Just one year later, the tenants of Lvchgau and Walheim joined them. The merchants of Bietigheim followed in 1951 and in 1961 the independent cooperative in Gemmrigheim joined. The cornerstone of Felsengartenkellerei Besigheim was laid in 1972 with the merger of the cooperatives in Hessigheim and Besigheim. From the merger of these two independent cooperatives the Felsengartenkellerei Besigheim eG was formed and became one of the largest wine cooperatives in Wurttemberg Germany.

In the beginning individual wine presses were still operated in the separate wine-growing communities, but due to economic constraints the cooperative shifted towards using a joint wine press. In 1976 a new era began for our traditional wine region with the building of a winery at the foot of the eponymous rock gardens. A strong foundation was built for a promising future at Felsengartenkellerei and the strong alliance of individual cooperatives.

At Felsengartenkellerei Besigheim we conspire to produce excellent quality products. What could then be more suitable than using a small wall lizard (Podarcis muralis) to symbolize the pursuit of quality amongst the rocky hillside?
Our winery lies at the foot of the idyllic rock gardens in Hessigheim, a well-known district recognised as a popular hiking and excursion destination. The cooperative has approximately 1,400 members who cultivate 500 hectares of a considerable range of grape varieties. Our wines that we offer are as varied as the vines produced. From the traditional Swabian “Trollinger” to wines with a Mediterranean character, we truly offer the perfect wine for every connoisseur. Naturally this also includes very particular quality cuvees from the Baroque, Ice wine and Dessert wines. Our pallet is completed with a sparkling selection of wineries Sekts, Seccos and a wine cocktail.

The range is divided into a clear quality structure. The traditional predicate classification is used in the semi-dry and sweet wines.
Quality enhancing measures are of course a prerequisite for consistent quality, which extends from the basic range to the quality editions. These measures include reducing revenue, strictly controlled management, and a strict control of the grapes. We use the most modern wine-making technology, extensive experience, expertise, and the finest sensor technology when fulfilling the high demands of our house.

Rigorously using quality as the prime aim to reaching success has been shown and been confirmed as the clear road to achieve corporate goals. Each year at wine tastings our products have won renowned notable awards. In 2008 and 2009, in appreciation of our total quality concept, successive gold metal national prizes as awarded by the German Ministry of Agriculture. The ability to produce such outstanding products is a result of the valuable natural treasure of the steep slopes of the Neckar and Enz valleys. The unique micro-climatic condition of the region promotes an unmatched growth of quality wine grapes. A distinctive feature of this particular vineyard is the high light output and the enormous heat absorption. The vines grow on terraced slopes with a gradient of up to 50%, which are traversed by man-made stone walls and narrow scale walls. The grapes from the steep slopes along the rivers are particularly valuable, yet reaping is disproportionately cumbersome, time-consuming and dangerous. The grapes can only be harvested with a lot of enthusiasm and dedication through hard manual labour done on the steep slopes. Our tenants show a special passion, which is reflected in the end product. Structured, full-bodied wines are produced, which cannot deny their special origin.
There are few such distinguished geographic regions in the German wine-growing districts. With care and long-range foresight the preservation of this unique cultural landscape has been guaranteed. Anyone who has enjoy the sight of this landscape when wandering through the valley during the early summer when the vines shine in deep green, or during the autumn when the slopes are covered with a hot sparkling potpourri of colours, will certainly not forget these majestic sights. These steep slopes with their natural stone walls are also home and habitat for a variety of mostly exotic plant and animal species, such as the company symbol, the wall lizard, seen on each of our bottles of wine.